Voices of Freedom - The Quilt 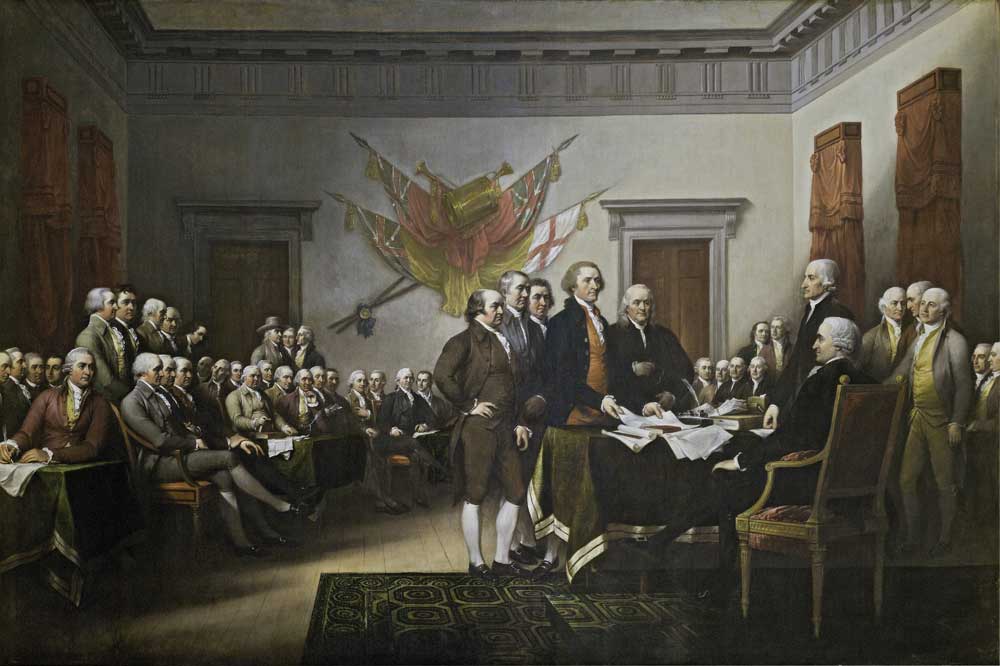 of our nation’s most notable and recognizable paintings and currently resides in the Capitol Rotunda in Washington, DC. While in high school, I first saw the painting and I still remember the awe I felt gazing upon the painting knowing the historical significance the painting represented. All my senses said I needed to reproduce the painting in some form but the experience I possessed at that point rendered nothing of value.

In my late 50s, quilting became a prominent part of my life and that is when I realized the amazing creativity derived from a sewing machine and thread. Making thread-painted quilts had become an obsession and passion and I was consumed with making competitive quilts. The vision of Trumbull’s Declaration of Independence was still running around in my head but I knew reproducing the painting in fabric and thread was going to be a huge undertaking. But undeterred Voices of Freedom took its first baby steps. First Step – Research – Reproducing one of the USA’s most recognizable paintings required a huge sense of reverence and responsibility in that the quilt had to be authentic to the original painting in all respects. So to make sure I honored Trumbull’s work and thus the Declaration itself, months of research were required.

Trumbull’s painting of the Declaration of Independence includes 42 of the 56 signers of the Declaration. Five delegates were included in the painting but were not signers. John Trumbull spent some 27 years traveling up and down the eastern seaboard by carriage with a travel-size canvas so he could paint the portraits from life. Of the 47 portraits on the front of the Declaration 36 were taken from life; others copied from an existing portrait or memory and in one case the resemblance between father and son was such that the portrait was painted from the son’s likeness.

Trumbull excluded 14 of the lesser-known signers which included those who died in the years after the Declaration was signed and those images that were not available. Both Jefferson and Adams advised Trumbull that delegates should be left out rather than poorly represented.

The photo of John Trumbull’s painting was acquired from the Architect of the Capitol. The photo was quite dark so to assure the faces were authentic to the original painting, each head was individually painted with Tsukineko inks to represent each face as close as possible to the original. A year was required to complete all 47 faces.

r the Declaration of Independence quilt was painted in Photoshop and custom printed on fabric.  The original working pattern used was in proportion to the original painting. Each thread-painted figure had to be to the exact size so as to fit perfectly on the printed background fabric. Even being 1/16” off on any figure would present a major problem.

The buttons on the clothing were made of polymer clay and the gentlemen’s shoes were made of real leather, ascots were batiste and their hosiery was from lining fabric. The final quilt was 95” x 65” and the quilt took over 4,000 hours over a 3 ½ year period. The quilt was quilted by Teri Taylor over a 3 month period. Quilting on the surface enhanced the room's design and the liberty bell was quilted in the crown molding to further the theme of the quilt.

To carry the authenticity of the quilt further and to honor the historical significance of the painting and thus the quilt, Photoshop was used to create small snapshots of history on the back of the quilt. Snapshots include a schematic of the figures from the front, photos of the 47 men depicted on the quilt front, the Declaration of Independence, and a bit of history about some of the signers that signed the Declaration but were not on the painting as well as a short history of John Trumbull’s painting adventure.

After the Declaration had been adopted, the committee took Jefferson’s “fair copy” of his rough draft to John Dunlap, the official printer to Congress. The Declaration was printed along with the text: “Signed by Order and in Behalf of the Congress, John Hancock, President. Attest. Charles Thomson, Secretary”. No one is sure how many of the copies John Dunlap printed on July 4 but twenty-six copies are known to exist to what is commonly referred to as the Dunlap Broadside. Twenty-one are owned by American institutions; 2 by British institutions and 3 by private owners.

The signers of the Declaration w

ere not wild-eyed, rabble-rousing ruffians. They were soft-spoken men of means and education. They had security but they valued liberty more. Standing tall, straight, and unwavering, they pledged: “For the support of this Declaration we mutually pledge to each other our lives, our fortunes, and our honor”. No loss of life or money could ever diminish the honor of these heroes and it is that honor that we celebrate our independence on July 4 each year.

It is my greatest hope that my quilt the Declaration of Independence – Voices of Freedom lives up to just a fraction of the original painting and that it has been represented with honor, integrity, virtue, and most of all reverence to the original John Trumbull painting and what that painting represents.